EQUITIES: The big winners – and losers – of the corona crisis

The very substantial spread in returns across different regions and sectors in recent months illustrates the value of risk diversification and sound allocation in equities.

Few investors have earned money on their equity investments during the corona crisis. Nevertheless, how individual investors have performed can vary greatly – depending on how they spread and allocated their investments.

While European equities, for example, have fallen 23.3% since peaking on 19 February this year, US equities are down just 15.4%. That the US has outperformed Europe is in no small part due to sector composition, explains Danske Bank’s chief strategist, Henrik Drusebjerg.

“The tech sector accounts for a much greater share of the US equity market than the European market, and tech equities have performed much better during the crisis than the market in general. The same applies to Amazon.com, even though the company in fact belongs under the consumer cyclicals sector.

In contrast, the financial and industrial sectors weigh heavier in Europe, where banks have been hit by massive impairment charges on loans due to the corona crisis, and industry is suffering from a slowdown in corporate investment appetite.

“At Danske Bank, we have had an underweight in European equities and an overweight in US equities for some time now, and we have also had an overweight in IT stocks. When the corona crisis began to ‘infect’ the financial markets at the end of February, our view was that the US equity market would likely prove more robust should the crisis escalate,” says Henrik Drusebjerg.

China among this year’s winners

Paradoxically, China – the country where the coronavirus first erupted – has been one of the best-performing equity markets in 2020, both since the start of the year and since global equities peaked in February. While global equities have fallen 17.4% for their peak, Chinese equities are down just 7.1%. There are several reasons for this, according to Henrik Drusebjerg:

“Chinese equities rose less last year, and the authorities in China can move much more quickly to stimulate the economy via fiscal measures than here in Europe or in the US, where the political decision-making processes take much longer. Furthermore, China was much more heavy-handed in terms of a lockdown and quarantining those with an infection than we have been in our part of the world. That is just one of the consequences – for better or worse – of living in a democracy in Europe or the US, while the power of the Chinese authorities is less unfettered and so they can react more effectively in the short term,” says Henrik Drusebjerg.

With a loss of 10.0%, Japanese equities have so far also come through the corona crisis in reasonable shape, and for European investors returns have been bolstered by a strengthening yen, which has provided an FX bonus on Japanese equities.

Turning to emerging markets, the loss of 18.1% since peaking covers a lot of geographical divergence. Whereas China tended to limit emerging market losses, Brazilian equities, for example, have been very hard hit, not least because the corona crisis came at a time when the country already had significant debt problems and had not fully implemented important reforms. Looking ahead, we at Danske Bank also see the most attractive return potential in the Asian emerging markets. 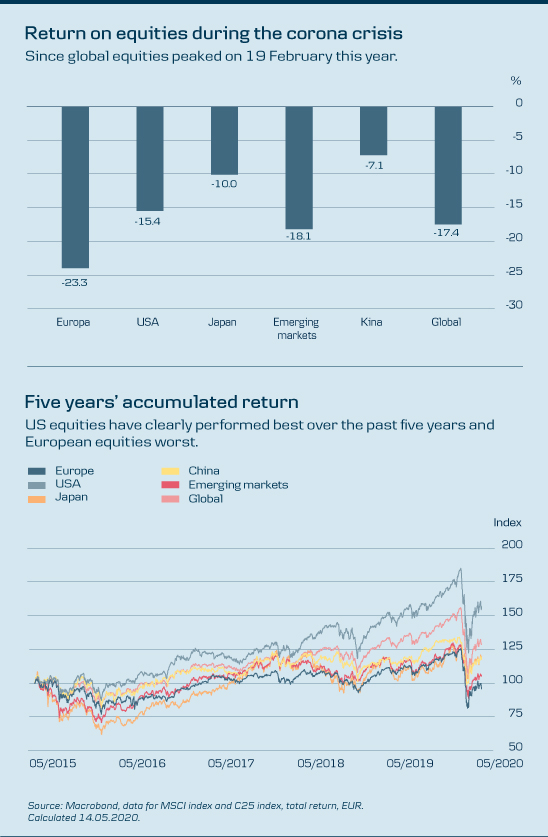 Importance of risk diversification and allocation

According to Henrik Drusebjerg, these pronounced differences in return during the corona crisis are a reminder to keep in mind two important factors when investing in equities:

This material has been prepared for information purposes only. It does not constitute investment advice. You should always be aware that historical return and forecasts on future developments are not a reliable indicator of future return, which can be negative. Always consult with professional advisors on legal, tax, financial and other matters that may be relevant to determining the suitability and appropriateness of an investment